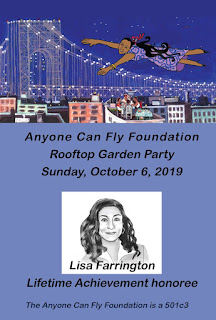 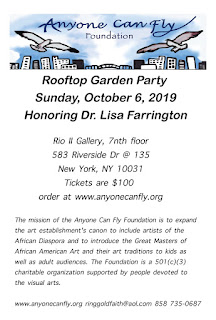 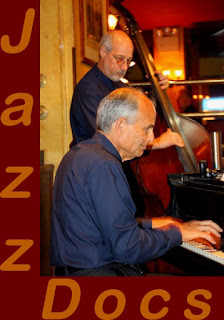 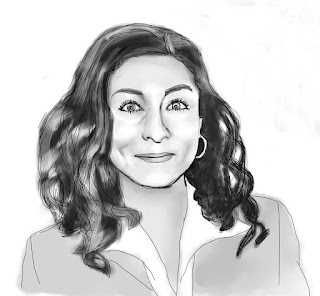 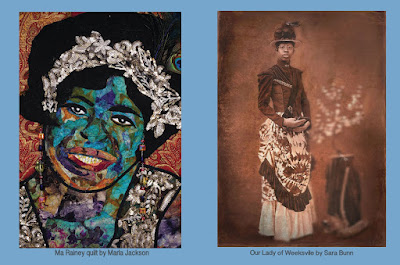 Eleven years ago, in 2004 the first "Lifetime Achievment Award" was given to Cuesta Benberry, a quilt historian and since then the foundation has honored; Elizabeth Catlett, David Driskell, Samella Lewis, Richard Mayhew, Dr. Margaret Burroughs, Aminah Robinson, Sam Gilliam, Camille Billops, Nelson Stevens and Dr Carolyn Mazloomi for their contributions to the cultural history and the rich legacy of African Americans. 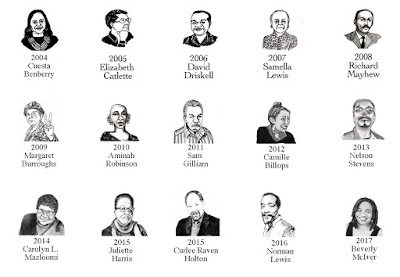 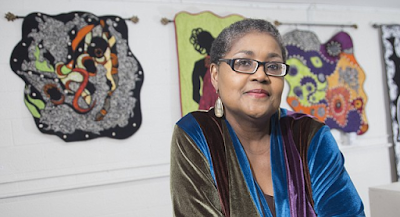 Meet the world-renowned visual narrative artist and quilter Marla A. Jackson, in her art studio and teaching gallery. Jackson is a community-based visual art educator.  Her works have been exhibited in over thirty-five national and international venues, including the American Folk Art Museum, The Smithsonian's National Museum of African American History and Culture. One of her most famous works is part of the permanent collection at Smithsonian's Anacostia Community. Jackson's narrative quilts are inspired by the oral histories of her ancestors and the Kansas region. Jackson is a partner with Freedom Frontier's Heritage Area. Jackson has been featured in the Kansas History Society Quarterly, Threads of Faith, MS Magazine, Speaking Out of Turn Magazine, Wild West Magazine, Quilt Life Magazine, PBS programs, local and regional syndicated press, as well as exhibit catalogs. Jackson's company, Marla Quilt's Inc. African American Museum and Textile Academy is an impetus for developing artistic skills, enhancing individual and communal expression and furthering intellectual awareness.
The African American Quilt Museum and Textile Academy is recognized as a program in the National Park Service, National Underground Railroad Network to Freedom Program. 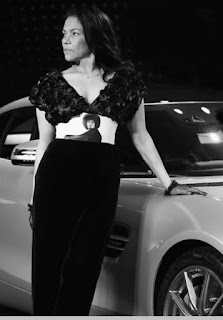 BunnFunn is an independent company whose creator, Sara Bunn, is a socially conscious 9-5 CEO's Executive Assistant, at home seamstress hobbyist, turned moonlighting designer. With a taste for history, culture, fashion, crafts and civic duty, has created a fashion line that includes hand sewn vintage reproduction era silhouettes, casual and conservative classic dresses, jackets, coats, and wraps; performance wearable art, whimsical textile creations, women's business attire, and glam holiday separates. We also carry a line of resort wear with multi purpose interchangeable pieces for quick getaways or elaborate destination weddings, in addition to honeymoon or special occasion pieces, all made to measure. A ten year plan projection will find BunnFunn working towards expanding in terms of creating community activities for youth in the arts and crafts fields, hosting benefits for charitable organizations geared to our youth, and seeking solutions to some of the social problems of our communities through exposure to the arts. BunnFunn wants to be a part of combatting the negative influences of social media on our youth and young adults. There is the threat of the lure of the streets, and the obvious lack of fundamental survival skills such as basic home economics in addition to the arrested development of their personal sense of purpose and responsibility, especially in our communities that are economically challenged. We look forward to educating through fashion, music and the arts and helping to spread awareness of the ever growing abuse of women and children, the destruction of the nucleus of our families, and to help cultivate in victims of domestic violence, a sense of pride in spirit, along with their style. BunnFunn wants to ultimately help beautify as well as empower women and communities, one stitch at a time. 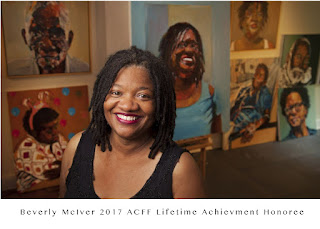 The mission of the Anyone Can Fly Foundation is to expand the art establishment's canon to include master artists of the African Diaspora and to introduce the Great Masters of African American Art and their art traditions to kids as well as adult audiences. The Foundation is a 501(c)(3) charitable organization supported by people devoted to the visual arts.

Eleven years ago, in 2004 the first "Lifetime Achievment Award" was given to Cuesta Benberry, a quilt historian and since then the foundation has honored; Elizabeth Catlett, David Driskell, Samella Lewis, Richard Mayhew, Dr. Margaret Burroughs, Aminah Robinson, Sam Gilliam, Camille Billops, Nelson Stevens and Dr Carolyn Mazloomi for their contributions to the cultural history and the rich legacy of African Americans.

Beverly McIver is widely acknowledged as a significant presence in contemporary American art and has charted a new direction as an African American woman artist.  She is committed to producing art that examines racial, gender, social and occupational identity. Her work is in the collection of the North Carolina Museum of Art, the Weatherspoon Art Museum, the Baltimore Museum of Art, the NCCU Museum of Art , the Asheville Museum of Art, the Crocker Art Museum, the Nasher Museum, and the Nelson Fine Arts Museum. McIver is the subject of an HBO documentary, entitled Raising Renee. This documentary aired on HBO December 2011, and was nominated for an Emmy in 2014. McIver has served on the Board of Directors at Penland School of Arts and Crafts, and currently serves on the board of directors at Yaddo and at the Walentas-Sharpe Studio Program.She has completed many residencies, including Yaddo, the Headland Center for the Arts, Djerassi, Penland School of Crafts, and is one of the 2017 winners of the Rome Prize, awarded by the American Academy in Rome. Beverly McIver is currently the Esbenshade Professor of the Practice of Art, Art History, and Visual Studies at Duke University.

Visit Beverly's website to learn more about her and to see her paintings http://beverlymciverart.com.